SPRINGFIELD, MASS. – There was a moment where it appeared Cam Reddish’s evening was going south. He stretched his foot in discomfort, suffering from leg cramps.

He had spent most of the game trying to keep up with IMG’s full court press and fast break when his body was just starting to give out on him. He was taking the defensive plays off for the most part, trying to save his energy so he could continue to try to bring his team back to reach overtime.

Reddish finished off Westtown’s 75-71 loss to IMG Academy with 25 points on 9-for-22 shooting (3-for-12 from deep), but he got perilously close to pulling out a surprise win.

With a minute left, he managed to get into the lane and score to make it 74-71. 30 seconds later, teammate TJ Berger got the steal and got it to Reddish. He bricked his three and IMG was able to ice the game at the line. 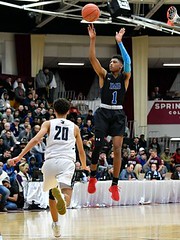 “I would’ve [hit the shot. My legs just gave out cause I was cramping in the last two or three minutes,” Reddish said. “I’m disappointed, but you move on.”

Reddish and RJ Barrett have been neck-and-neck for the top ranking in the class, with both players heading to Duke in the fall anyway. Barrett has a remarkably polished and technically proficient game. Reddish has a loose fluidity that makes him hard to read and even harder to contain. 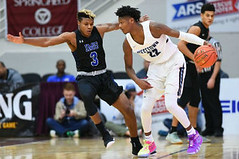 “I think we’re going to be great, including with Tre (Jones). We’re all just naturally unselfish, so it’s going to be a lot of lobs and passes, kicks for three and stuff like that.

“So obviously, I can’t wait.”At his 6-foot-8 size working as a ball handling scorer, Reddish has proven himself to be the type of three-phase scoring force that keeps defenses up at night. But he also has a tendency to be a shot hunter who can waste a few possessions going to what he considers a good shot. When he gets to Duke, he’ll be playing with point guard Tre Jones and Barrett, who is already one of the best creators in the country, even as a big guard. This might be the perfect balance Reddish needs to become the efficient yet high-volume scorer that fulfills his enormous potential.

“I think we’re going to be great, including with Tre,” Reddish said. “We’re all just naturally unselfish, so it’s going to be a lot of lobs and passes, kicks for three and stuff like that. So obviously I can’t wait.”

It’s great that they complement each other so well, but Reddish is continuing to improve his weaker areas of his game. He’s trying to establish himself as a knockdown shooter off the bounce, something he’ll need to continue to improve upon when he likely enters the draft in another year and faces the longer NBA three-point line.

These added skills will help him continue to lead his class and position Duke next year to be perhaps the best team in the country. But count him among the many stars at Hoophall who hope Zion Williamson will choose their school when he announces his pick on Saturday. When Reddish was asked who was currently unsigned that he hoped would commit to Duke, his answer was easy,

He’s trying to give Zion some space and help with the decision when needed, as he has experience with how annoying it can be for everyone to be hounding you about your decision. But whatever happens, they will still have an exciting and scary team in Raleigh next year.