Value
Points
Rebounds
Assists
Steals
Blocks
Turnovers
Recap by USA Today
SPRINGFIELD, Mass. – Defenses cannot hope to stop Vernon Carey, Jr. They can only hope to contain him. For Oak Hill, it turns out 29 points is good enough, coming away with an 83-69 win Monday at the Hoophall Classic.

Kentucky signee Keldon Johnson book ended this one for Oak Hill with impressive showings in the first and fourth quarters, but what sets Oak Hill apart as a program, even at an elite tournament such as the Hoophall Classic, is the depth in talent throughout the rotation. It’s this collective effort that allows them to overcome a strong showing from an elite talent like University School’s Vernon Carey, who finished with 29 points, nine rebounds and four assists.
“(Center) Dave McCormack had a double-double. He had 10 and 10. [Carey] is a focal point of their offense. For us, we have Keldon (Johnson), Keyontae (Johnson) and Will (Richardson) out there. So the other guys stepped up too. Maurice (Calloo) played well in the first half and Evan Johnson played well in the second half for us.”
Smith told USA TODAY, with a laugh, that he thought they did a good job on Carey, holding him to just 29 points.

“He’s a great player and you can’t really contain him,” Smith said of Carey. “You just try to keep him from not going crazy. He had 11 in the first quarter and I was like, ‘This is not going to work. If this guy gets 40, we’re in trouble.’ But he had a little bit of a lull in the second quarter. But he’s a really good player.”

Oak Hill’s advantage was in not just its depth, but it’s effective game planning. Coach Steve Smith wanted to figure out how to limit the 2019 No. 1 player, Vernon Carey, a dynamic big man who thrives anywhere on the floor. They were able to establish their offense early by finding ways to pull him away from the rim and give Oak Hill easier lanes to the hoop.

“Early on we ran a few ball screens and pulled him out,” Oak Hill coach Steve Smith told USA Today. “Then we ran some flat screens later in the game trying to pull him out of there because we didn’t want him at the rim blocking shots. Will (Richardson) did a great job of running our team and making plays and he was hard to guard today.”

Keldon Johnson was Oak Hill’s high scorer with 21 points on 9-for-13 shooting and closed it out when it looked like things were going to get hairy for them. University was selling out at all costs to contain him, even with University’s 2020 top prospect Scottie Barnes face guarding him at half court while his teammates attacked a vulnerable defense. 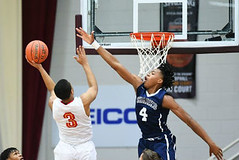 “I would say, yeah, once I get going, a lot of teams try to pretty much take me out of the game, do whatever it takes to stop me, don’t let me get going,” Keldon told USA TODAY. “When they started face-guarding me, that was as expected. I just had to, when I touched the ball, I had to make something happen.”

Johnson was a consistent scorer throughout the game and knew when to pick his spots and attack.

“He’s got a great feel for the game,” Smith said. “He knows what we need him to do, whether it’s me telling or him just knowing what to do. Especially late in the game when we’re going to go to him and let him make plays.”

The Kentucky signee is ranked toward the top of his class for a reason. He has power and a smooth handle attacking the rim. Moreso, he has unrelenting confidence and swagger.