Value
Points
Rebounds
Assists
Steals
Blocks
Turnovers
Recap by USA Today
SPRINGFIELD, Mass. – Louis King is going to be part of a dynamic duo with Bol Bol when he heads to Oregon in the fall. But on Monday at the Hoophall Classic, he and Ohio State commit Luther Muhammad showed they are already a dominant pairing in a 71-58 win for Hudson Catholic over John Carroll.

King is a big wing who makes his power and bounce apparent early. He opened the game by flying in for a putback slam off a missed layup and then followed it up with a steamrolling finger roll on the fast break a few minutes later. His game is high-octane, with a variety of ball skills and high-flying finishes that leave him as prone to turnovers as highlight reel plays. He would finish with six turnovers, but it was washed away by his 32 points on 12-for-17 shooting (4-for-6 from deep), 7 rebounds, 4 assists and 3 steals in 30 minutes.

King is as potent a wing scorer as there has been at this tournament thus far, showing the ability to pull up out of the dribble with a snappy looking jump shot and elevate with power to finish at awkward angles or just throw it down.

Whenever he would turn it over, he would lock in defensively to get a stop and impose himself even more on the next offensive possession. He hates making mistakes, but he seems to love making up for them. He builds himself up into a frenzy going into the game, allowing him to thrive early.

“Just started from the warmups,” King said. “I got it going and it went into the game and I just took over”

He labeled himself a versatile big man – he is clearly a wing but measures at 6’8” – but he showed in this game how the offense can play through him from the perimeter. The play that was perhaps most telling of his potential was halfway through the fourth quarter, when Caroll tried to trap him high above the three-point line. King tried to draw the trap out with a through the legs step back dribble, getting the ball into his strong hand. Once they committed, he rifled a pass to the big in the post, who drew the foul. He followed it up with back-to-back spot up threes from each corner, tying the bow on a comprehensive offensive performance.

“I will probably split the double team,” King said. “It just motivates my game. I just split it and score it or assist to my teammates. It’s just easy for me.” 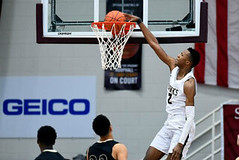 It could get even easier next year when he teams up with Bol Bol at Oregon. He has spent the weekend talking with Bol and their coach Dana Altman about preparing for next season.

“I’ve been playing with [Bol] since [Team] USA, so us playing together is just natural for us,” King said. “I think we’re going to be number one in the country next year.”

For the rest of this year, he and Luther Muhammad will continue to menace teams on both ends. Muhammad was tasked with guarding Carroll’s Quickley in the first half and held him to just five points as Hudson opened up a 15-point halftime lead.

Muhammad showed an elite nose for the ball, getting four steals and blowing up numerous plays as Carroll struggled to get their offense started in the first quarter. His energy defending in transition and being physical on the ball allowed Hudson to gain separation as King went off.

“He’s tough. I probably could have got off the ball a little bit more and I guess used my teammates a little better, but he’s tough,” Quickley said of Muhammad. “Respect to him.”

Muhammad finished with 17 points and a game high +20. He plays with a constantly revving motor, chasing the ball every time it leaves his opponent’s hands. He attacks the rim with elite quick-twitch athleticism, making him difficult to contain as he finished five-for-six at the rim.

To Quickley’s credit, he fought hard to bring Carroll back in the second half. He’s an explosive point guard with good passing vision who will be a dangerous threat at Kentucky from downtown and attacking the paint. He finished with 19 points, 6 rebounds and a pair of assists.