Ramey, a senior Webster Groves, Mo., point guard who missed the early part of the season after breaking his right wrist in the his team’s opener, put up 26 points, nine rebounds and seven assists Monday in a 90-75 defeat of No. 24 Mount Vernon, N.Y., at the Spalding Hoophall Classic.

Ramey had backed out of an earlier commitment to Louisville after the news of the FBI’s investigation broke and said he’s glad he’s taken his time figuring out his new college choice.

The 6-3, 175-pound senior has a big list. He made two recent unofficial visits to Oklahoma State and Texas and has two official visits coming up in February to Villanova and UCLA..

“This go-around (recruiting) is a lot easier than the first time,” he said.

Ramey had plenty of help Monday from Carte’are Gordon, who had 31 points, 11 rebounds and seven blocks. 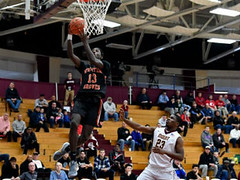 “We always play well together and as you can see, the chemistry is still there,” Ramey said.

“We’ve known each other since we were on the same team in the fifth grade (an AAU team coached by Ramey’s father), so when we play together, it’s like another day at the office,” Gordon said.

Webster Groves is 8-6, but the Statesmen play a national schedule and several of those losses came before Ramey’s return. The Statesmen were coming off the BASS Pro Shops Tournament of Champions in Springfield, Mass., where they lost to No. 2 Oak Hill Academy (Mouth of Wilson, Va.) and No. 19 Brentwood Academy (Brentwood, Tenn.).

“Having Courtney out really helped our role players step up and get a better feel for the game,” Gordon said.

Jason Douglas-Stanley, a George Mason commit, led the No. 24 Knights (11-1) with 32 points, including eight three-pointers.

“He’s the best shooter that I’ve coached,” Knights coach Bob Cimmino said. “He’s a steal for George Mason and they did a great job of recruiting him.”

Mount Vernon had no starter taller than 6-5, so it had difficulty containing the 6-8 Gordon, who is a St. Louis commit.

“We were going to front him, but we had to do a better job,” Cimmino said. “He was susceptible to charges, but missed a lot of opportunities and we think that would have changed the flow of the game.”

Mount Vernon, the reigning state public school champion, kept playing hard, but could not get closer than seven points in the second half.

The early pace was more suitable for Webster Groves, which despite having seven turnovers, shot 73% in the first half while Mount Vernon shot only 35%.